The origin of Koishiwara pottery dates back to 1669, when Hachinojo, the grandson of Takatori Hachizo the first, found potter's clay in the Sarayama area in Koishiwara. 1682, the third head of the Kuroda clan started to make porcelain by inviting potters from Imari, where porcelain production was flourishing.
Influenced by Imari, when the kiln first opened in Koishiwara, there was a time when porcelain was the main production. It developed through exchange with Takatori pottery, a tea ceremony pottery producer in the same area, and pottery began to be made, forming the unique Koishiwara pottery style.
Koishiwara pottery won the Grand Prix at the 1958 World Exposition in Brussels, Belgium, attracting attention with the catchphrase ""yo no bi"" (beauty of use)."" In 1975, it became the first ceramic ware to be designated as a traditional craft in Japan, and it continues to produce daily life utensils, preserving the traditions.

"It is said to have originated when Nagamasa Kuroda, the lord of the Chikuzen province, brought back the potter Hachizo Takatori (Hachizan) from his military expedition to Korea and had him build a kiln. The production was controlled and patronized by the Kuroda clan and flourished as the Imperial kiln. Also, it was selected as one of the seven Enshu kilns under the guidance of Enshu Kobori, a noble Japanese tea master, which lead Takatori pottery to become a famous tea ceremony pottery.
In 1665, Hachizo Sadaaki moved the kiln to Tsuzumi in Koishiwara, and also made another kiln under Fukuoka Castle and started to operate in 2 locations. Due to the abolition of the feudal domain in the late 1800s, the Takatori kiln was once closed. Later, the 11th generation Seizan, a descendant of Hachizan, reestablished the kiln in Tsuzumi in Koishiwara and the techniques of Takatori pottery have been handed down from generation to generation since then." 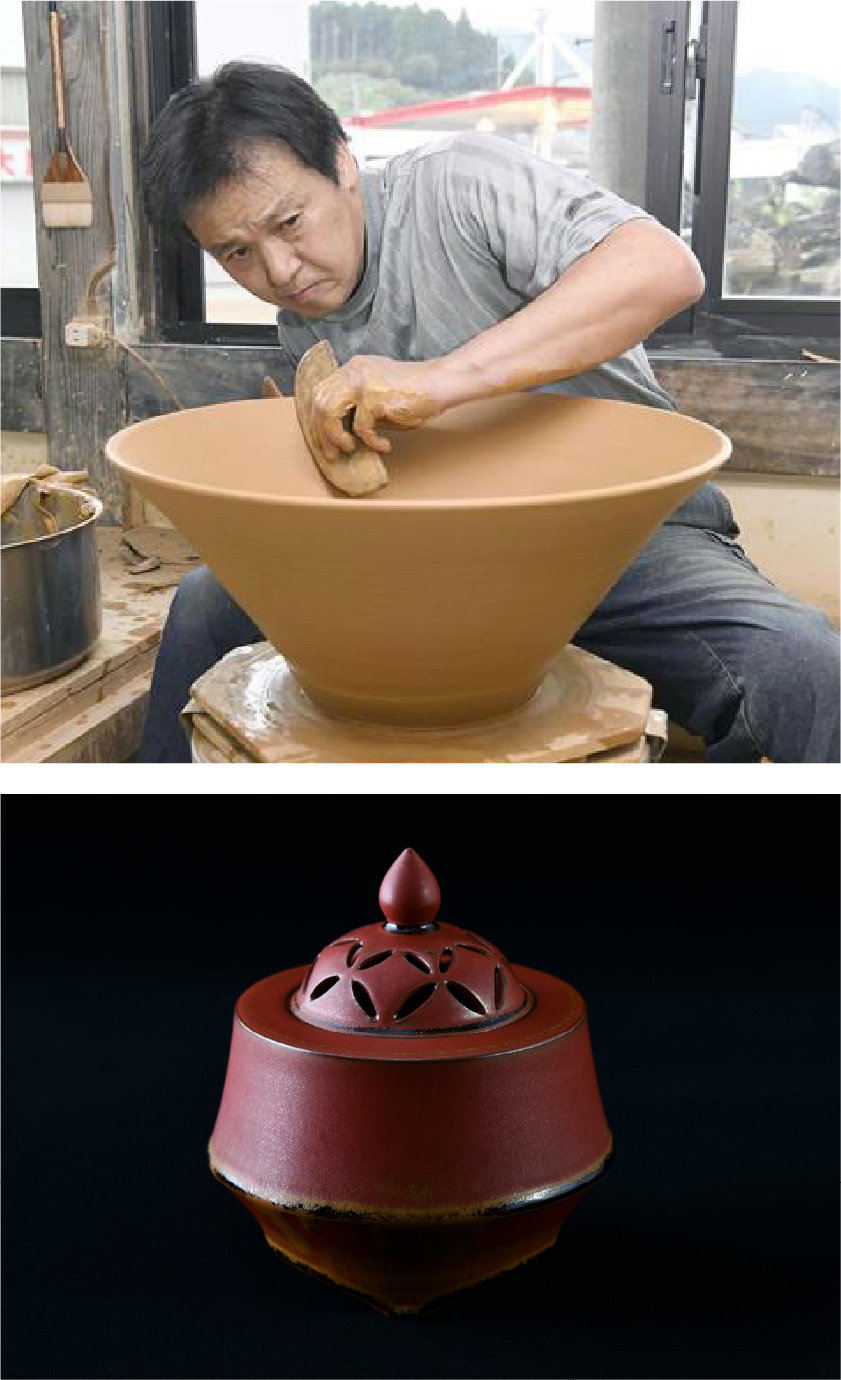 In 1959, Fukushima Zenzo was born as the 16th generation of the Chigai Kiln, pottery in Koishiwara, Fukuoka Prefecture. Based on his motto to create something that has never existed before using local materials in Koishiwara, his creation is made both with the traditional Koishiwara pottery techniques such as the tobikannna technique, while at the same time a variety of original techniques and styles such as iron glaze, red glaze, and Nakano-geppakuji glaze, and he creates pieces that are both traditional and imaginative.

Since the beginning of his creative career, he has received many prestigious awards. In 2017, he was recognized as a holder of important intangible cultural properties designated by the government as a Koishiwara pottery artist.

This work is an incense burner made by him with a red glaze which is one of the representative glazes of Fukushima Zenzo's work. It is a work that conveys his intention to create something new while preserving the tradition of Koishiwara with over 350 years of history.

This work is an incense burner made by him with a red glaze which is one of the representative glazes of Fukushima Zenzo's work. It is a work that conveys his intention to create something new while preserving the tradition of Koishiwara with over 350 years of history.